Since being completed in 2011, this 55.000 seater has already seen some major football games, such as the UEFA Europa League final in 2012 and the 2014 FIFA European Qualifiers game between Romania and the Netherlands both attracting more than 50.000 visitors. The stadium also hosted some major concerts such as Ed Sheeran, Metallica, Depeche Mode and Red Hot Chili Peppers. In a less than a year’s time, the UEFA Euro Cup will be coming to Bucharest, one of the 12 host cities bringing three games.
Although equipped with the latest technology and facilities which offer a remarkable experience to the game and concert goers, the stadium is continuously improving its environmental performances. The upcoming Euro Cup is a perfect opportunity to make these improvements meaningful and contribute to a greener and more sustainable Euro Cup.

This is why the National Arena was chosen as one of the 11 pilot stadiums within the LIFE TACKLE project’s framework. The second visit took place on 31 July in order to assess the progress of these measures and define the future steps and responsibilities of various actors in this process. Organised by Florin Sari and the Romanian Football Association, the meeting was also attended by Tiberio Daddi on behalf of Scuola Superiore Sant’Anna and Erneszt Kovacs of ACR+. After a quick briefing interview with Radu Visan, the FA’s Secretary-General and understanding the FA’s intentions and contributions to the project, the LIFE TACKLE team continued the visit by meeting representatives of the city of Bucharest and the stadium itself, responsible for the management of the stadium, mobility and other environmental performances such as waste and energy management. They announced some major projects which would contribute to more sustainable football games. 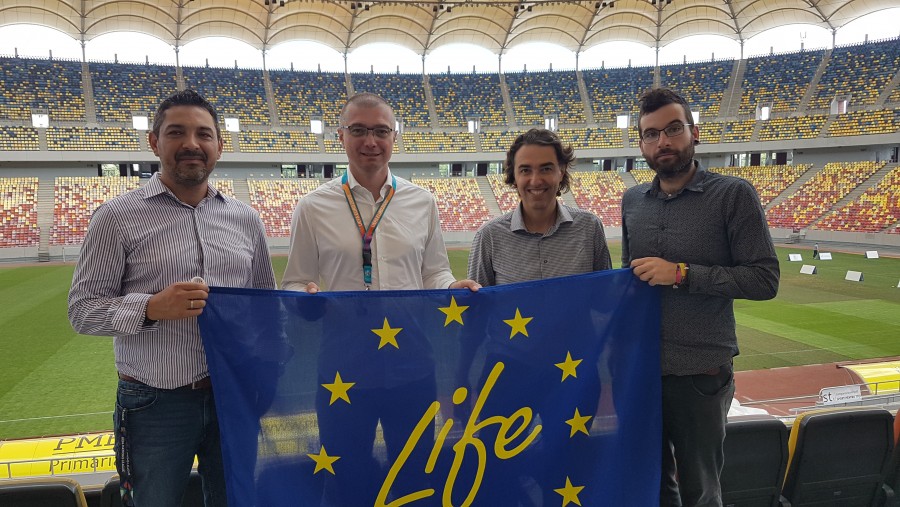 Since the stadium serves as the home ground not only for the national team, which only plays 5-8 home games every year, but also for several clubs such as FCSB and Dinamo Bucharest, improvements in certain environmental performances would also reflect throughout the year during the national championship games, too.

The city announced an expansion of bike lanes, which are quite limited at the moment to the very centre of Bucharest and few major axis. While trams are currently the main way to access the stadium, a new bike lane is planned to be laid down by the end of the year, which would facilitate the access to the stadium for cyclists, but also allow car-free access for the visitors coming into Bucharest from the east of the city.

The city and the stadium management have also planned an installation of a waste compactor which, accompanied by separate collection scheme, would significantly improve the current performance which is based solely on general waste collection, without any separate collection in place. When it comes to waste, one new system is planned to be introduced – reusable cups. The current practice of serving drinks in single use plastic cups generates large amounts of such waste. The recent concert of the American rock band Metallica served as the very first event where reusable cups were tested as a scheme. Based on this experience the stadium management will try to expand it to football games, too.

The upcoming games of the Romanian national team on 15 October and 15 November should result in some quantitative and qualitative results and outcomes of the pilot tests which will serve for the overall analysis of pilot measures being tested all cross Europe this autumn.