Titled “Environmental management in Belgian football: Current practices and the way forward” and held on 7 March, the event had the objective to present the project’s achievements in Roi Baudouin stadium, as on of the project’s the 11 pilot stadiums and open the doors to future collaborations and follow up of the project.

The event was organised by ACR+ and EURACTIV, in collaboration with the Royal Belgian FA and the City of Brussels and supported by the Belgian Proleague. It managed to gather speakers from Belgian football clubs, including KAA Gent, OH Leuven, Standard de Liege, and Royal Union Saint-Gilloise but also local and regional authorities responsible for environmental management in all three regions in Belgium such as Brussels Environment, Brussels Proprete, Fostplus, OVAM, BeWAPP and others.

While Ernest Kovacs of ACR+ shared the key observations and conclusions coming from the TACKLE project, Helene Vossen (Brussels Environment), Aurore Van Bogaert (Fostplus) and Lysiane Dernelle (Brussels Proprete) highlighted the new waste management plan at Roi Baudouin stadium which would be launched in April and which is one of the outcomes of the TACKLE activities in Brussels. Marvin Olawaiye of ACFF presented another European project, Green Coach which would introduce monitoring and benchmarking of environmental footprint in sports events.

Speakers representing clubs showcased their clubs’ environmental management initiatives in different areas, from waste management solutions to environmentally friendly infrastructure and mobility plans. These resulted in inspirational and promising discussions and led to potential collaborations and replication of solutions elsewhere.

Beyond the Pro League Clubs, the event also had attendees from other consultants and entities working on environmental management in Belgian football and football stadiums. These organisations and local/regional stakeholders were showcased during the panel that concluded the event. The panel offered tools and support various stakeholders can offer to football clubs.

The event was moderated by Nikolaus Kuramyer, a journalist who has been covering the LifeTACKLE project for EURACTIV Germany. 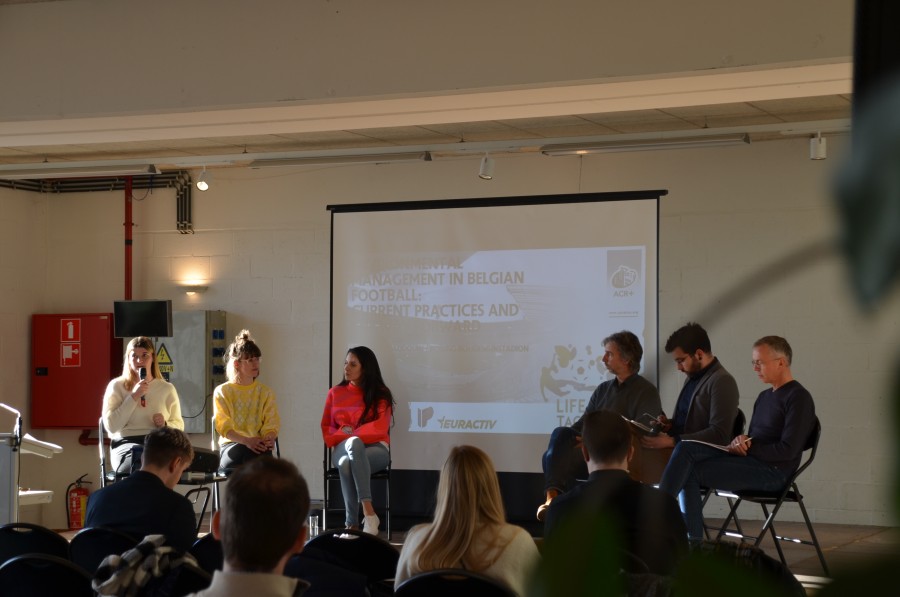